Last night, though, I decided to cook anyway.  I pulled some boneless pork chops out of the freezer along with a bag of Green Giant riced cauliflower “risotto” medley and whipped up a quick, healthy dinner.

First, I defrosted the pork chops in the microwave.  Then I breaded them with panko and parmesan cheese. I tossed them in the oven on 350 for about 30 minutes.  While that was in the oven I put a couple tablespoons of olive oil and some minced garlic in a skillet, then added the “risotto” medley.  Little by little I added about a cup of vegetable broth. I added some broth and stirred until it was absorbed, then kept repeating that until I used the whole cup and added some parmesan cheese.  Here are the results.

It was a healthy dinner that took less time to make that it would have taken to wait for a delivery.

It’s that time of year again!  Christmas is a week and a half away.  It can be wonderful and magical with lights and cheerful holiday music, planning gifts for loved ones, and some seriously delicious food.  It can also be insanely stressful with crowds of people and long lines everywhere.  With long lists of people to buy gifts for, busy schedules to manage, and family members you really wish you didn’t have to see.  How can such a short period of time be so wonderful and magical one moment then make you want to hide in a blanket fort and not move the next moment?

In the past, I have put so much pressure on myself for everything to be perfect.  I needed to have perfect gifts for everyone on my list, a perfectly planned schedule so I could see everyone in my family on Christmas day, the perfect plan to avoid family members I really didn’t want to see, and have the perfect outfit in case someone was taking pictures.  So, as you can guess, I hated this time of year.

What will you do to make your holidays less stressful and more enjoyable?

Is it worth it?  Is it worth the effort?  Worth the money?  Worth the pain?  Worth the time?  These are questions we ask ourselves on a daily basis.  In the month since my gastric sleeve surgery, I’ve learned what’s worth it for me and what isn’t.

The first thing I would tell anyone who asks is that this surgery was totally worth it for me!  I am feeling like my normal self for the first time in years.  I can walk for more than a block without my feet hurting.  I am starting to have more energy.  My self-esteem is getting better every day.  I am satisfied with a very small amount of food.  In fact, navigating the world of food is really the only challenge I have right now.

Before I eat I have to ask myself if the amount of protein in the food is worth it.  Is it worth the amount of fat, sugar, and carbohydrates?  If I can’t say yes to the question, I choose something else.  After I eat I have to ask myself if the food is worth the way I feel.  Most of the time the answer has been yes.  Only two foods have not been worth it.  Those two were meatballs and a cheeseburger (without the bread) if you’re curious.  The meatballs were too dense for me.  I could only eat half a meatball.  That is not worth it at all.  The cheeseburger just left me feeling gross.  Tasted good going down, felt not so good later.

The psychologist at the Weight Center asked me how I imagine life in a smaller body.  I honestly didn’t know how to answer at the time, but now I’ve got a list!

Life in a Smaller Body

I’m sure I’ll add more to this as time goes on, but this is what I’ve got for now.

It’s no secret that I’ve struggled with my weight my entire adult life.  I’ve had several go arounds on Weight Watchers, tried Jenny Craig, tried counting calories and tracking every single calorie consumed and burned.  They have all offered me short term success but the pounds have always come back and brought friends.  A couple years ago I started researching weight loss surgery because, quite frankly, I’m the heaviest I’ve ever been and I’m miserable.  When I first started researching it, I mentioned it to my primary care doctor at the time and she dismissed the idea.  She said I just needed to work harder and be patient, then gave me some Overeaters Anonymous and Weight Watchers pamphlets.  Now, those programs have worked wonders for some people but they made my issues worse.  I lost very little weight and became obsessed with food.  So, I found a new doctor and tried again.  That doctor was more dismissive than the first one.  Work harder, eat less, be more patient, try Weight Watchers even though it hasn’t worked before.  I tried it again and failed miserably.

By that time I was really frustrated.  My self esteem and mood were in the toilet.  My entire body was achy and tired.  Somehow I got the energy to find yet another new doctor and try again.  This time my doctor was very responsive.  She listened carefully while I told her about my research and my reasons for wanting surgery and why I thought it was the best option for me.  She actually agreed with me!  She gave me a referral to a local weight loss and bariatric surgery center.

That was in January 2017.  I attended the first available information session, which was in March.  Soon after that I was evaluated by a nurse practitioner, nutritionist, and psychologist.  All 3 had to approve me as a candidate for surgery.  I was finally approved in July and now I have my surgery date, October 16.

That surgery date comes with about a million appointments I have to attend, so I’m a little overwhelmed but I’m also relieved.  I’m also pretty excited!  This is going to change my life for the better.

My name is Kathryn and I had the gastric sleeve done in October 2017.  Not only have I lost 100, I’ve also gained control over binge eating.  This blog is meant to help me keep that control and hopefully help others along the way.  Join me as I navigate the world with my new (smaller) stomach and healthy habits! 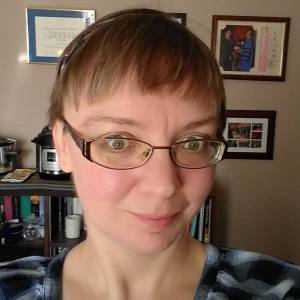